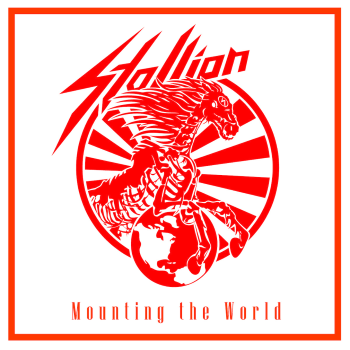 It’s been 6 months since I first heard Stallion‘s incredible demo.  That means 6 months of relentless agony in waiting to get my hands on their upcoming record.  Well, it is safe to say that the day has finally come and holy hell was it worth the wait.  Now if this is the first time you dudes hear about Stallion, make sure to take a look at my previous review on their absolutely fantastic demo, which featured both “Canadian Steele, and “Give It To Me” (both are also available on this EP).  Take the time to read that review if you can in order to get a feel of what the dudes at Stallion have in store for us on this brutal record, as well as some interesting details on the lyrical formation and influence behind “Canadian Steele”!

I’ll just go right out and say it now: this is arguably one of the greatest heavy metal releases of 2013 by far, alongside Borrowed Time‘s debut album (which all of you maniacs better check out).  “Mounting the World” is also one of the most diverse and assorted heavy metal albums in recent years, offering much more than just your typical traditional metal riffing. Thrashers can easily bang their heads to the blazing fast “Shadow Run”, whereas fans of speed metal can easily take a kick at the now classic “Canadian Steele” or even “The Right One”, whose intro reminds me of something out of Savatage‘s repertoire. It also happens to be my personal favorite on the EP, and it’s quite hard to deny that statement!  Aside from the gut-wrenching riffing that is oh so perfectly executed by Axl and the melodious raspiness of Paul’s vocals, what takes the cake for me on this record are the harmonious guitar leads that are evidently apparent throughout those aforementioned tracks.  Now I know I’ve said this time and time again, but if you really want a simple phrase to summarize Stallion‘s songwriting and sound, it would certainly be “the Motley Crue/Accept from hell”.  Why I say this is because it is clear that Stallion emits a certain “glam” vibe to their overall sound, in which they blend with classic heavy metal influences, such as NWOBHM and speed/thrash, in order to produce a fairly unique experience. The production of the record itself is also reminiscent of 80s speed/thrash metal albums, but with a modern twist that surely emphasizes the true might of the raging Stallion.  Simply put, if you are a fan of heavy metal, loving this album is your metal-given right!

Needless to say, this is a perfect way to start these dudes’ musical career, and I simply cannot wait once they fully assemble a lineup to be played live! Their popularity amongst metalheads seems to be growing at a very fast pace indeed ever since the release of their 2013 demo.  It is very clear that their passion and dedication to the true meaning of heavy metal has gathered them the much needed attention they deserve!  Let us just hope that they’ll mount to the top of the underground heavy metal world and conquer everything in their path!

I urge you guys to purchase the album; making quality music like this deserves our support! 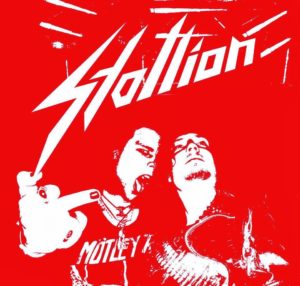