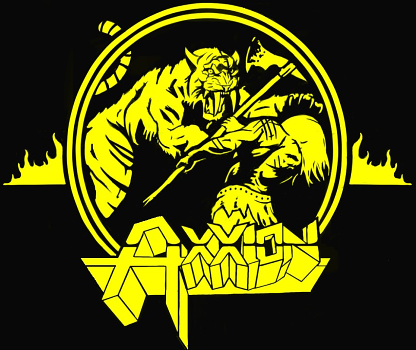 Band: Axxion
Release: Axxion (EP)
Genre: Heavy Metal
Country: Canada
Year: 2012
Label: Released by Heavy Forces Records
Facebook Page
Review
The Canadian heavy metal assault took off by storm in recent years, spawning some of the most versatile and impressive bands to have ever emerged since the glorious days of the 80s.  Having shared experiences with numerous bands from this very scene, Axxion have not only forged together a cult following through their compelling sounds, but have gathered with them some very talented individuals.  And with the recent addition of Sir Shred, known for his rapid, yet precise solos and riffing; heard notably with Skull Fist, prior to his welcoming.  Axxion just simply hit the nail with what constitues a true traditional heavy metal record, all while incorporating some speed and power metal influences in their sound, and a dash of that NWOBHM power in it as well.  Not only do they represent the Canadian heavy metal wave as established newcomers, but  they have also cemented their precense to the heavy metal world with their newly released EP.  I was granted the honor of experiencing them live and even meeting with a couple of the band members, who are just straight up honest, funny and humble people, which is quite refreshing to see from artists today.  Their setlist, which also included the great Saxon anthem “Denim and Leather”, had me headbanging from start to finish. 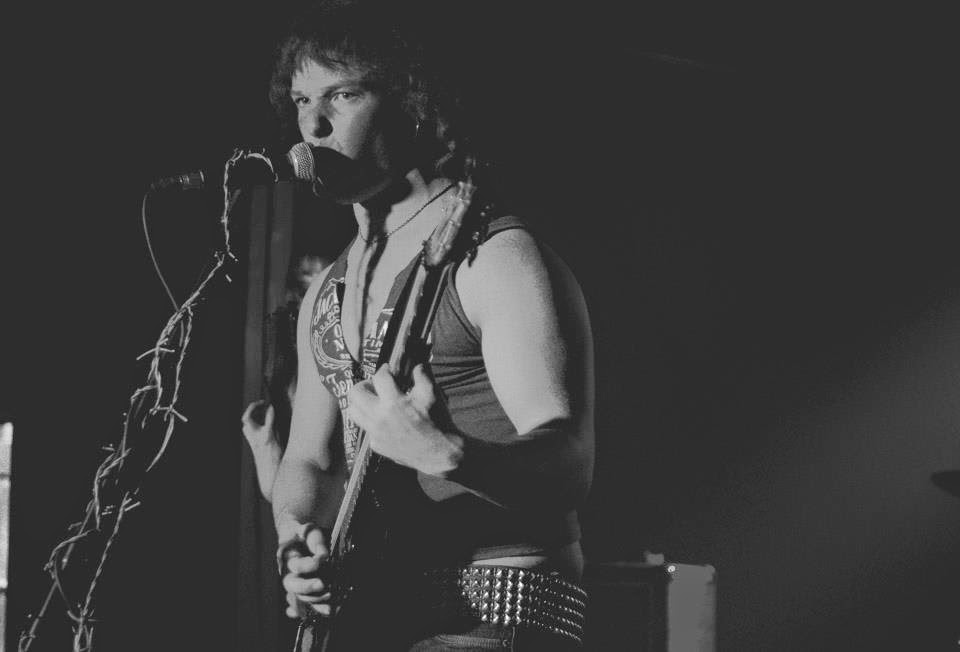 Anyhow, onto the actual review dudes.  This kickass record starts off with the very notable “The Rite”, what has to be the most hard-hitting song on the album, in terms of riffing and vocal styles, which Devon Kerr completely nails out of the park, especially with those high screams that I cannot get tired of.  The small bridge in the song that is played ever so elegantly, as well as the exchanging solo bit greatly sets the mood throughout the experience.  Truly reminds me of a mix between Skull Fist and Steel Wing.

“Stallion” kicks off with a bang.  That main riff had me going there for a bit, as it shows their clear influences of a NWOBHM sound.  Once again, Devon’s vocals truly impresses me, as he greatly compliments the band’s overall style.  Alison’s thunderous drum work is truly shown in this particular track; the metal world needs more women like her!  Pure, mindless, traditional heavy metal is what is offered here, and although the song might drag just a tad in the beginning, a few hooks and fillers here and there leaves it very much enjoyable.

Moving on with a bit of a more melancholic feeling than before, “Voyager” consists of a quite relaxing intro that soon blossoms and shifts between different riffs and tempos that just don’t seem up to par with the rest of the band’s material, but soon redeems itself for awhile with the help of some interesting lines through the solo, and later exits quite strongly.  Although being the weakest song on the record, the overall experience is not at all hindered.

With the face-melting track like “Savage Avenger” that follows, it is very hard not to appreciate music structure just like this one.  Harmonized guitar fillers and solos, and fist-pounding choruses.  It purely defines the band’s sound and drive, and is exactly what compelled me to discover them.  Definitely the strongest track on the record. 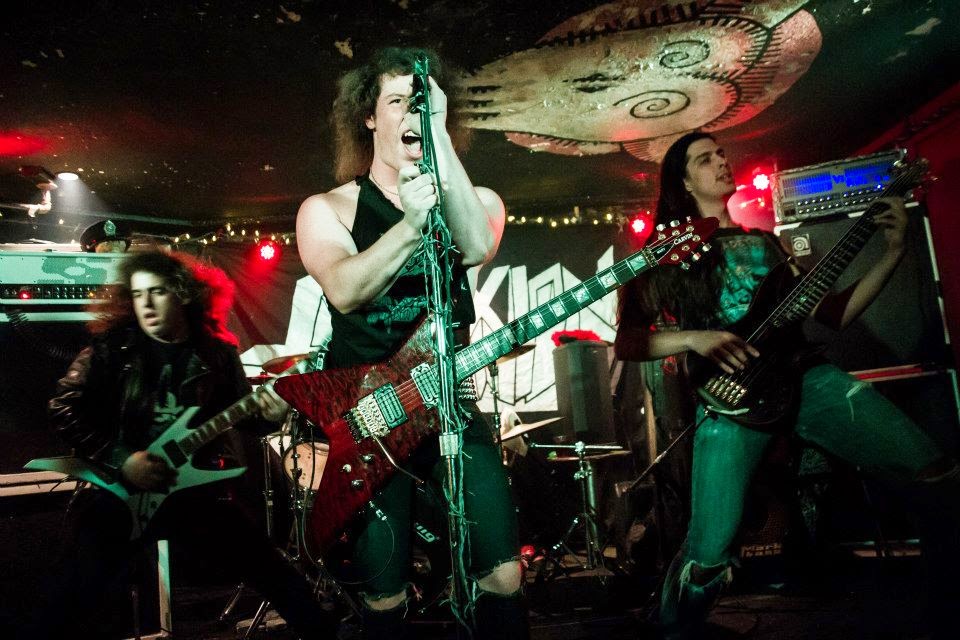 The fun ensues with “Crazy Nights”, offering a more laid back and partying attitude to the lyrics that continues in the same form as “Stallion” most of the way.  Solos are definately what make this band different from most emerging acts, and it’s easy to see how drawn in one becomes when experiencing it.

The bonus track that concludes the record, “Highway Rider”, explains some of the origins of Axxion‘s sound, as being heavily inspired by the NWOBHM scene.  Abosolutely loved the original by Black Axe, and Axxion were impressively able to reproduce this gem of a song to the best of their musical talent.  I hope they cover more songs in the future, maybe Virtue’s classic “We Stand to Fight”?  Or how about “Set the Stage Alight” by Weapon? Or even “The Beast” by Randy?  Would be quite awesome to see those gems covered.

With regards to the actual fundemental lyrics, I feel as though they could’ve revamped them just a bit, as I am not too fond of the whole sex or drinking themes often seen in heavy metal.  I hope the band could put out somewhat fantastical or philosophical lyrics in the future, but hey, that’s my opinion!

By producing a very enjoyable record that is filled with anthem-like choruses, captivating solos, and is just mindlessly fun in nature, I feel as though Axxion does show lots of potential, especially in live shows, and I truly hope that they continue to grow, both personally and musically.  Cheers to the band for coming out on November 30th, 2012 and for supporting the true!  Looking forward to more material and gigs! 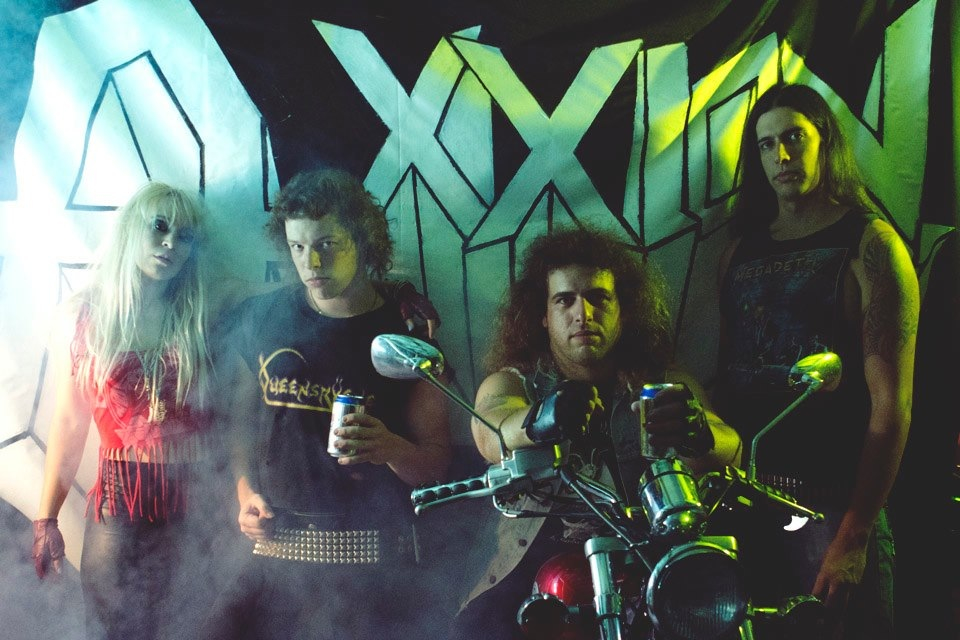