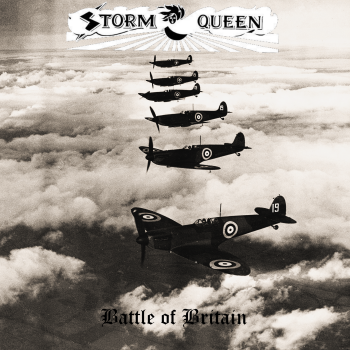 Reigning from the land of one of the first waves of some of the purest and most influential styles of heavy metal ever known, Stormqueen is sure to be one of the most overlooked bands of the NWOBHM as far I know.  Bringing forth a sound that reminds us of the great Tygers of Pan Tang, Stormqueen‘s musicianship, songwriting and talent is what truly make them passionate for the music they have offered us. Led by the intricate works and crisp, yet heavy and raw guitar playing of Dave Morse and Neil Baker, their first ever release proved just that.“Battle of Britain” is simply a buried treasure amongst British heavy metal fans, and it’s just a downright travesty that they never released a full-length album.  Nevertheless, “Battle of Britain” kicks off with the self-titled track, which consists of riffs that take you back to the glory days, all while being overlapped by solos and leads from left to right, and a chorus that immediately strikes the listener.  Truly an amazing way to debut their work!“Captives of the Moon” continues in the same vein at a somewhat slower pace and evidently darker and melancholic, in terms of riffing and vocal styles.  The tempo just soars after a bit, with yet another mesmerising solo by the British axemen.  This process from slow to fast pace is again repeated once more to introduce a more diverse approach to their songwriting styles.  Easily my favorite track off the demo, simply because of those solos!

“Lady Night” is yet another enticing track from this gem, where the first couple of seconds immediately grasp you and never let you go.  This is where Chris Glynn Jones truly showcases his vocal range and all-around musical ability, especially during the chorus.  The main riff is probably the heaviest sounding one from the whole demo, and is just compels you to bang your head along.

Picking up the speed with “Raising the Roof”, Stormqueen does just that, and hell, I’d be surprised if the roof is still intact after this one!  Evident punk influences are featured in this overall kickass, and downright metal track, and feels almost as if it laid the foundation for future musical styles, such as speed or even thrash metal.

Needless to say, Stormqueen easily fall into the category of one of the most overlooked British heavy metal bands of the 80s, and this demo alone just proves that they should be discovered and most of all, loved by every fan of the genre.  The word is out, now it’s your turn to fall into the world of Stormqueen! Cheers and support!