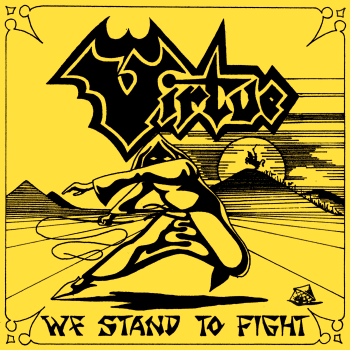 Where do I even begin?  Well, I can easily start off by saying how important this release is to the whole NWOBHM genre on its own, regardless of how this single came to light a couple of years after the decline of the scene.  Of all songs that the glorious NWOBHM scene has offered to die-hard fans like us, every single and album released, this one sits dominantly at the top of everything else and it is almost difficult to disagree.

Virtue were indeed unlike any band I’ve ever heard, as they mix a lot of different types of heavy metal into one, that being NWOBHM influences, the harshness of speed metal and the melodies of power metal.  If only Virtue released this masterpiece a couple of years earlier, they surely would’ve been as big as Saxon, even Maiden in my honest opinion.  That is how much potential they surely had and we can clearly hear all of that on “We Stand to Fight”, the ultimate heavy metal anthem.  The oh so complex and mystifying intro, to that dominant and harsh riff, perfectly being supported by Tudor Sheldon’s scorching vocals.  And to top it all off, the last minute or so has to be one of the greatest ending solos I’ve ever listened to.  Hats off to these talented dudes.  “High Treason” is an amazing track that doesn’t offer that same calibre as the latter, but it is still one of the best of the NWOBHM scene.